Goetz Botzenhardt is an award-winning producer living in London whose career spans some of the world's biggest pop records, as well as having a fantastic career mixing for film & TV.

His credits include The Pet Shop Boys, Faithless, Dido, the Sugababes, Sigala, Ella Eyre, Utada Hikaru. His recent film & TV work includes the Golden-Globe and Oscar-nominated Steve Jobs, Under The Skin with Scarlett Johansson, The Imposter, the Emmy-nominated War & Peace, One of Us with the BBC.

This course incudes 2 challenge assignments where you get:

In these lessons Goetz will walk you step-by-step through the mixing process, recreating a mix he worked on with composer Anne Nikitin. he'll discuss tools and techniques for mixing for Film & TV, what software, plugins and effects to use, what styles, and what approaches to take to being both creative and technical at the same time.

Goetz demonstrates the entire workflow using Pro Tools and a unique combination of racks, effects, busses, EQ, Compression, and Reverb. This course is applicable whether you're using Pro-Tools or any other DAW.

Learn the secrets, the settings, the best plugins to use! Whether you're a beginner or an advanced mix engineer, nothing beats sitting next to a seasoned pro, watching him work his magic to shake up a film score and take viewers on a rollercoaster ride! 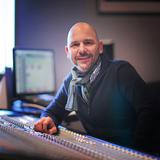 Get notifications about new courses in music production