Wish you could play the trumpet authentically in the Swing style?

Mike Lovatt - one of the UK's most in demand players - shares his lessons learnt from years playing with the greats from Quincy Jones to Eric Clapton, Oasis and The Philharmonic Orchestra.

By the end of this couse you'll be comfortable playing Swing technique, tones and 3 new Swing tunes from the book Easy Jazzy 'Tudes.

Mike Lovatt, acclaimed UK trumpeter and Chair of Trumpet at the Royal Academy of Music in London teaches you how to play trumpet authentically in the Swing style.

The course is structured around 3 specially selected pieces from the book Easy Jazzy 'Tudes that will build your ability to play with Swing feeling. The simple pieces increase in difficulty as the course progresses.

By the end of this course, you'll master the intonation, musicality, techniques and dynamics specific to this style.

This course comes with sheet music for the 3 tunes, demonstrations of Mike playing each piece that you can slow down and loop to focus on the tricky parts, and backing tracks so you can practice playing along with a real swing band.

So let's get started and start swingin'! 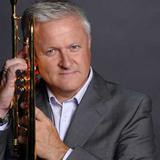