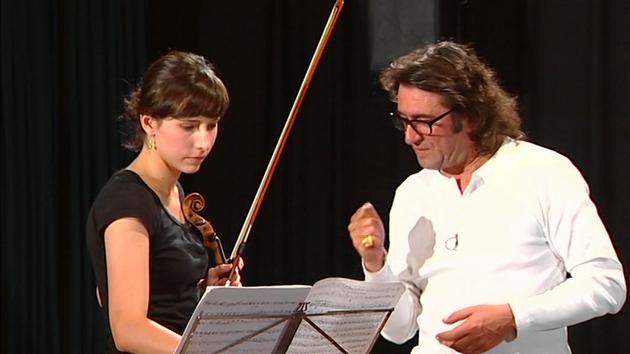 Yuri Bashmet is the pre-eminent viola player of the modern age and he has inspired the leading composers of our time such as Gubaidulina and Schnittke to expand the repertoire with significant new music. Described by The Times as 'without doubt, one of the world's greatest living musicians', he worked closely with such legendary names as Rostropovitch and Richter and is an inspiring teacher of the Viola.

In this masterclass he works on all three movements of Shostakovitch's Sonata for Viola and Piano - the last work he completed before his death in 1975. This Sonata has the paculiuarity of being composed by three movements, two of which are slow and structure a more dancing, almost folkloric, central movement. The viola's range gives to the whole piece a strongly expressive character. In order to compose this work, the master took inspiration not only in his native Russia's folklore, but also in many other composers, since the Sonata's last movement reveals borrowings from Beethoven, Berg, Rachmaninoff or Wagner's famous works.

In partnership with The Masterclass Media Foundation Archives, which provides a valuable educational resource in order to perpetuate musical passion and knowledge from one generation to another. [MMF021]