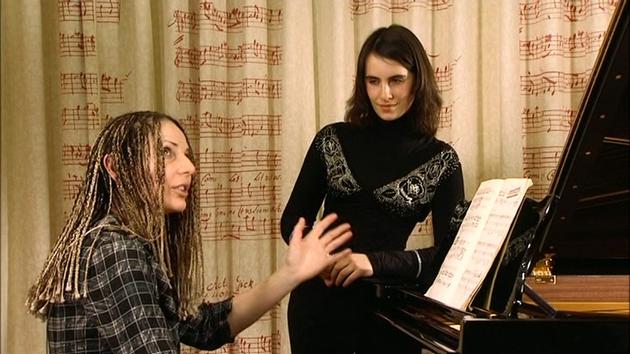 Joanna Mac Gregor is recognized as one of the world's most wide-ranging and innovate musicians, and has pursued a life connecting many genres of music defying categorizations. Appearing in over sixty countries, she has performed with many of the world's great orchestras and eminent conductors ( including Boulez, Davis and Rattle), and has premiered several landmark compositions. She has collaborated with many leading jazz and pop artists, from South African jazz to cutting edge electronica.

Her interpretation of Messiaen's piano music has received great acclaim.

Currently Head of Piano at the Royal Academy of Music, Joanna MacGregor, teaches in this masterclass one of Olivier Messiaen's famous works, Vingt Regards sur l'Enfant-Jésus. Composed in 1944, this score is a true meditation on the Christ's childhood, using themes such as God, love or joy: "More than in any of my works, I have tried to find a mystical way to express varied, powerful and sweet love, but sometimes also brutal, with multicoloured laws"

In partnership with The Masterclass Media Foundation Archives, which provides a valuable educational resource in order to perpetuate musical passion and knowledge from one generation to another. [MMF026]