Works for Flute by Schubert, Hue and Sancan 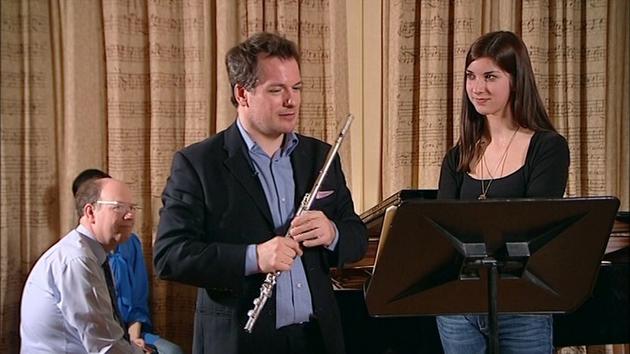 Emmanuel Pahud is generally regarded as one of the world's greatest flautists. He was one of the youngest ever principal players of the Berlin Philharmonic Orchestra when he was appointed in 1992. His innate musicality and extraordinary technique have put him high on the agenda for solo appearances in Japan, South East Asia, Europe and the United States. His regular recital partners include Eric Le Sage, Hélène Grimaud, Yefim Bronfman and the jazz pianist, Jacky Terrasson.

He is greatly in demand as a chamber musician and in this context has collaborated with most of the world's top soloists.

In this masterclass he works on Schubert's Variations on "Trockne Blumen"; Fantasie pour Flute et Piano by Georges Hue and Pierre Sancan's Sonatine.

In partnership with The Masterclass Media Foundation Archives, which provides a valuable educational resource in order to perpetuate musical passion and knowledge from one generation to another. [MMF038]