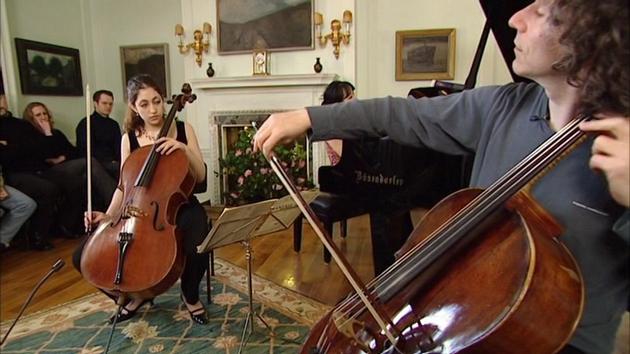 Steven Isserlis, one of the world's outstanding cellists, is a musician known for his strong ideas and passionate convictions about music. A champion of the works of Schumann, he also gets satisfaction in discovering and introducing into the repertoire works by lesser known composers which he considers deserve a wider audience. As well as giving concerts and recitals throughout the world, he is much sought after as a teacher. He is Artistic Director of the International Musicians' Seminar at Prussia Cove in Cornwall UK, the world-renowned residential workshop for talented young musicians, started by Hilary Behrens and the legendary Sandor Vegh.

In this masterclass, he works on Robert Schumann's Fantasiestucke, a group of three 'Fantasy Pieces' originally written for clarinet and piano but later arranged for cello and piano by Schumann himself.

A laureate of many awards, Steven was given in 2000 the Robert-Schumann-Prize of the City of Zwickau, Schumann’s home city. Thus, it comes naturally that he dedicated this masterclass to a famous piece of the German master. This cycle of eight pieces for piano, composed in 1837, was inspired by Hoffman’s Fantasiestücke in Callots Manier, not only for the title but also for the genius of this piece.

In partnership with The Masterclass Media Foundation Archives, which provides a valuable educational resource in order to perpetuate musical passion and knowledge from one generation to another. [MMF017]