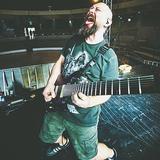 Charlie Griffiths is a guitarist and educator, adept at rock, heavy metal, and pop guitar playing. He has a wealth of experience playing corporate and session gigs, as well as touring with his own critically acclaimed progressive metal band, Haken. He has also been a regular contributor to the magazines Total Guitar, Guitar Techniques, and Guitar World for over ten years.

Since graduating from the Guitar Institute in 1996, Charlie has performed extensively. In 2002, he formed the band Linear Sphere with Martin Goulding, with whom he released the album Reality Dysfunction. In 2008, he left that band to join Haken.
Haken have since released five albums on the Sensory and Inside Out Music labels and gigged throughout Europe with bands including Dream Theater, Pain of Salvation, Marillion, Frost, Cynic, Big Elf, and Kings X.

Charlie continues to perform regularly with Haken as well as doing regular corporate and function gigs and touring regularly with Gareth Gates. A highly respected pedagogue, alongside his columns for Total Guitar, Guitar Techniques, and Guitar World, he has composed metal genre syllabus pieces for Rockschool grades 3-8 and travels internationally delivering clinics in metal techniques for Rockschool.

Hi - if you want help with your drumming you've come to the right place. Send me a message with a question or give me a performance to critique